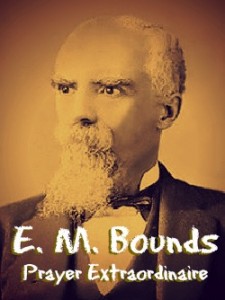 Edward McKendree Bounds (1835-1913) was an American author, attorney, and member of the Methodist Episcopal Church South clergy. While best known for his classic books on prayer, his others are beginning to be rediscovered by a new generation.

Bounds was a Missouri native, but at age 14 (following the death of his father) he moved to California to follow the gold rush. This was a fruitless expedition for four longs years, after which he returned to Missouri. He began to study law, and by the age of 19, he became the youngest practicing attorney in his home state.

However, he began to feel God’s call on his life, and by the age of 24 (in 1859), he was ordained and pastoring a church in Monticello, Missouri.

Shortly after his appointment, he fell into controversy during the Civil War. Because of his pastorate, his name was added to a list of people who were being required to take an oath of allegiance to the Union. In addition to an oath, those on the list were required to contribute $500 to the Union cause. Bounds disagreed with this type of fundraising (and besides, didn’t have $500), and was arrested, being charged as a Confederate sympathizer. He spent a year and a half in federal prison, and was eventually released in Memphis during a prisoner exchange between the Union and the Confederacy.

After his release, Bounds thought he would be of best use as a chaplain for the Confederacy, with the 3rd Missouri Infantry CSA. But during the Second Battle of Franklin, Bounds suffered a severe head wound caused by a Union saber, and was taken captive as a prisoner of war. He and other Confederate prisoners were later released June 28, 1865 (two short months following the close of the Civil War), upon the taking of an oath of loyalty to the United States.

Not to be dissuaded from his home and the people who he loved, Bounds returned to Franklin, Missouri to aid in spiritually rebuilding the war-torn area. It will come as no surprise to those familiar with Bounds that his most powerful ministry came through his weekly prayer meetings, which were known to often last several hours.

Doubtless, Bounds is best known for his eight books on prayer, which Jawbone has available singly through iTunes. However, his entire collection of ten books is available on iTunes, as well as Amazon, Barnes and Noble, and Kobo.

Get yourself a couple of free books!

If you’re a free book kind of person (and really, who isn’t?) in exchange for your email address, we’ll give you both Power Through Prayer and The Necessity of Prayer. Our email list is hardly intrusive. We hate junk mail as much as you do, so we’ll only send something when we actually have something worth saying.

Heaven: A Place, A City, A Home
Pocket –

The Reality of Prayer
Pocket – iTunes

The Weapon of Prayer
Pocket – iTunes

The Essentials of Prayer
Pocket – iTunes

The Necessity of Prayer
Pocket – iTunes