Here is another chapter, titled “Envy,” from G.D. Watson’s book The Secret of Spiritual Power.

It never ceases to amaze that while this book was written in 1894, the message is desperately needed for this generation today. Only a quick glance at the tabloid magazines will prove that envy is still viewed as “half a virtue,” or maybe just a “very ordinary defect.”

Without further adieu, we give place to Watson to speak:

One of the most dangerous forms of inward depravity is envy. It is a form of sin which the world looks upon with great leniency, which fashionable people in society look upon as half a virtue, and which many professing Christians regard as a very ordinary defect. But according to the Word of God, it is the seed bed of unlimited misery and crime. Envy as an evil affection in the heart has two parts to it, consisting of hatred to others, because of their superiority in excellence, station or advantage, and at the same time, a certain degree of vexatious anger because of the inferiority of its possessor. Envy acts as a terrible cancer in the heart; it destroys the soul’s own happiness; it prevents its owner from loving his neighbor; from enjoying the prosperity of others; it prevents him from enjoying his own blessing; it puts sourness into every blessing; throws gloom into the sunshine; and turns the soul ultimately into an engine of malice. It is in this sense the Bible declares that “Envy slayeth the silly one,” and that “envy is the rottenness of the bones.” Envy is manifested against those of superior amiability, as was the case against Joseph by his brethren. It is said that Joseph’s brethren “envied him” and “through envy sold him.” They recognized in him a loveliness of disposition, a loftiness of aim, a purity of motive, a winsomeness of character which captivated the father’s heart, and signalized him so far above themselves that they hated him for his very excellences, called him nicknames, caricatured his most unselfish expressions. Had their hearts been thoroughly pure, so as to “rejoice with them that do rejoice,” the very reasons for their envy would have been reasons for their love and appreciation. Another instance of envy is that against the success of Moses as a great leader and commander. We are told that they “envied Moses also within the camp.”

[bctt tweet=”Envy is the utter reversal of the spirit of brotherly love. —G.D. Watson” username=”JawboneDigital”]

And this mean spirit was not from the lowest ranks of the people, but among the high church officials and his own near relatives. Their envy could not brook any superior. His extraordinary abilities; his constant access to God; his quick and far-seeing insight; his divinely inspired sway over the people was a constant torture to those who envied him. This example of envy has been repeated thousands of times, not only among sinners, but in the highest ecclesiastical circles. There is a certain battle-scarred missionary from the Dark Continent, and when he appears among great bodies of Christians, a flutter of excitement passes over the assembly, and the multitudes instinctively rise to welcome him. But this very man, because of his unselfish triumphs for Jesus, is envied by some who are vexed at him because of the very things that make him good and great and beloved. Daniel was envied because of his superior talent. Paul was envied by the Jews because of his success in making converts. Jesus was envied by the Scribes and Pharisees because of His mighty, spiritual power over the people. If anyone doubts the statement that envy is the secret spring of crime, let him look at the Word of God and history. The Bible inquires, “Who is able to stand before envy?” As if, like a great forest fire, it burned down everything before it. Paul speaks of certain persons as being “full of envy and murder.” Notice how the Spirit puts murder as the fruit sprouting from the seed of envy. Again, he says, “Whereof cometh envy, strife, railings.” And again, “Where envying is, there is confusion and every evil work.” Again Paul wrote to the Corinthians saying, “I fear lest there be envyings, wraths.”

Envy hunts for defects in those who are above it, it endeavors to shine by beclouding the splendor of others, and tossing the luster of others down to its own darkness. It misconstrues the good in others to make itself seem good. It forms and industriously circulates slander against superiors in order to seem virtuous itself.

It was envy that slew Abel; sold Joseph; slandered Moses; put Daniel in the lion’s den; crucified Jesus; stoned Stephen; persecuted Paul; built the Inquisition; mobbed Wesley; and in ten thousand ways tried to deface the form of goodness, to throw malicious vitriol into the face of loveliness. It is peculiarly a Satanic trait. Every atom of this disposition must be purged out of us before we can be Bible Christians or enter heaven. Envy is the utter reversal of the spirit of brotherly love.

We’d like to remind you that this book is available for your Kindle, and also in print. Watson is quickly becoming one of our favorite authors. His words are decidedly poetic, but also spiritually instructive, and are exactly what we need to hear. 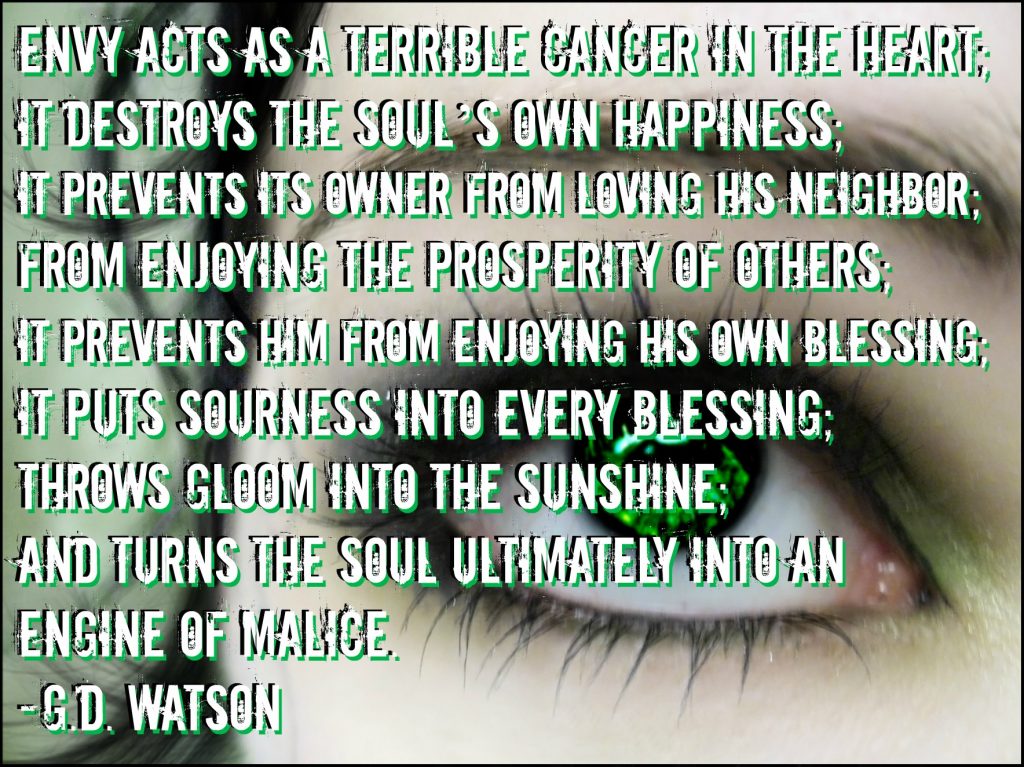