Faith and Works, by Charles Price 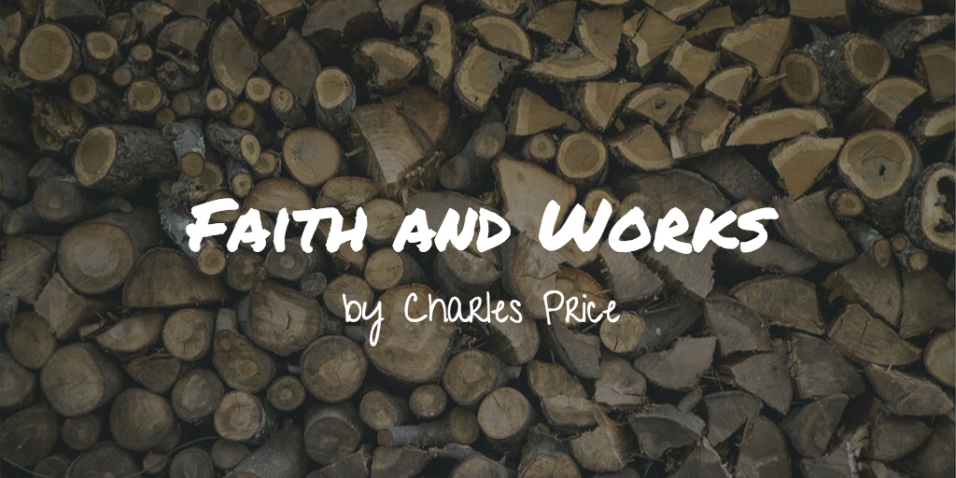 Charles Price, The Meaning of Faith

The following post is a chapter from Charles Price’s classic book The Meaning of Faith, which is one of the first books that we brought to print. Why were Price’s books among the first to get the print treatment? One of you asked for it. If you’d like to see another one of our eBooks come to print, ask us about it. While we don’t make any promises, we do make efforts to give our customers what they want.

We now come to a study of the relationship between faith and works. That there is such relationship there is not the slightest doubt. James 2:20 declares that faith without works is dead. He tells us in that very remarkable and wonderful chapter that faith is something more than intellectual assent or even belief with the heart.

Faith not only believes, but it does. James declares that the devils believe; his inference is that if faith is nothing more than belief, then it would be possible to say that the devils have faith. But faith accomplishes things. You can have belief without accomplishment. I can say that there is an airplane leaving the local airport tonight at 8:00 for Chicago, but the fact that I believe it will not take me to the great metropolis in Illinois.

One of the troubles with the modern church is that it has some belief with no faith. There is belief in faith undoubtedly, but belief has to be moved into action before it can increase to appropriating faith. You can prove your faith by what you do; faith will prove itself by making you what you ought to be.

Faith must have a body. It must of necessity express itself and as it expresses itself it must be in works. There is always action to it. It is living, vitalized, moving, appropriating. It pulsates with activity—it is vibrant with spiritual life.

[bctt tweet=”One of the troubles with the modern church is that it has some belief with no faith. –Charles Price” username=”JawboneDigital”]

Let us examine for a little while some of the concrete cases that are recorded in Hebrews 11, the great faith chapter of the Bible.

The first incident that is given is the one of the elders obtaining a good report. If you will turn to the story of the Exodus, you will discover that there is no mention at all of the word faith in connection with their report. Paul is declaring that they showed their faith by what they did.

We next read of the faith of Abel offering unto God a more excellent sacrifice than that of Cain. But when we turn to Genesis 4 and read the account, we find that the word faith is never mentioned. Once again Paul is declaring that what Abel had when he offered his sacrifice unto the Lord was faith. He showed it by what he did. The sacrifice that was offered by Cain and brought such displeasure to the Lord was undoubtedly the product of the reasoning of this sinful man. Abel proved his faith by what he did, although no mention is made of faith as such in the Old Testament account.

We read in Hebrews 11:5 that by faith Enoch was translated that he should not see death, but in reading the very short account of the life of Enoch we discover that the word faith was never mentioned in connection with him at all. He, as we all know, is the type of those saints who are to be translated before the apocalyptic judgments. He lived in a day of iniquity and wickedness. He lived in a time of unbelief. In spite of every environment and circumstance the Scripture declares that he walked with God. One day he went for a walk and forgot to come back. The Bible declares he was not, for God took him. Paul, in his Epistle to the Hebrews, makes the emphatic declaration that what he did was faith. It was not only what he believed alone that made it faith, it was what that belief grew into when it was energized by activity. Faith must express itself—it must have a body—it must be in action.

We now come to Noah. He is another in the good parade of Old Testament worthies whom Paul brings out of the historical past as an example of faith before the eyes of the Hebrews of his day. You can read through the account of the building of the ark and the coming of the flood (see Genesis 6-9) and you will find absolutely no mention of faith. What the Lord does say to old Noah is, “For thee have I seen righteous before Me in this generation.” In spite of the jeers of his friends and the criticism of the apostles of reason he went ahead in obedience to the Word of the Lord and built his ark. Thousands of years later Paul wrote to the Hebrews and said that that was faith.

And so he goes on reminding a race that was befogged and lost in the midst of its own doubts and fears of the faith of their forefathers in generations gone by. He tells them that these men exercised faith before they even had received the promises in the sense the Hebrews of Paul’s day had become the recipients of the promises of God.

There is not the slightest doubt but what the teaching of both James and Paul is that faith, to be faith, must be in action. In order to accomplish something you must do something. How in the world could you ever accomplish anything unless you did the thing that you accomplished, or at any rate subscribed towards its consummation. So it is with faith.

Faith acts—it does something—it moves out. Its power increases as we use it. The little stream that flows today might become an irresistible river tomorrow, but it can never become a river if it were to be confined in the banks of a pool. To hide the talent in a napkin and bury it in the ground will never increase it; instead, rust is liable to destroy the treasure you think you possess. So the talent of faith if hidden and buried will begin to decay into inanimate belief and ultimately deteriorate and destroy itself by inactivity.

Put faith in action. Faith that builds the ark before the flood waters come will live to see the vindication of the divine word. 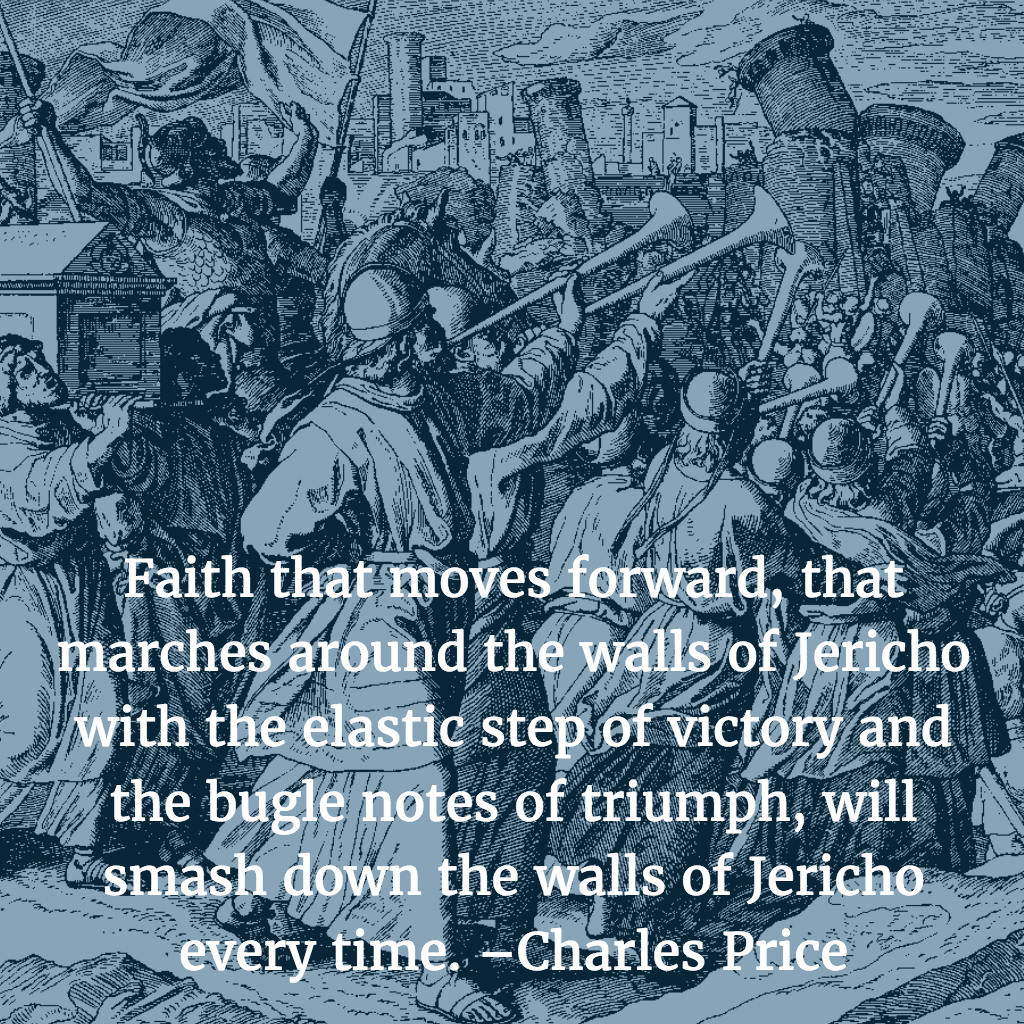 Faith that never looks back, that takes an Abraham on a road of unknown future, will perhaps bring blessings to the heart, as God sent seed to the Patriarch, as numberless as the sands of the sea. He gave up the present for the future—he said “Goodbye” to the things he had for what was promised.

Faith in testing, such faith as inspired Daniel when they lead him to the lions’ den, will open the doors of the palaces of the king and frustrate the purposes of the enemies of God.

Faith on the march goes onward one step at a time, even though the wheels of Pharaoh’s chariot might be rumbling in the rear and the seemingly impassible Red Sea be not far ahead. But the faith that marches on will always sit on the hillside of victory and listen to some Miriam and her maidens sing a song of deliverance while they play their tambourines of praise.

So it is that James asked the question, “You say you have faith? What are you doing with it?” He wants to know. If you tell him you are doing nothing, that you just have faith and that it never accomplishes anything—never gets any results—then the apostle declares it is dead.

But when you tell him that you have faith and that faith works because you work your faith, then James is willing to praise the Lord with you. The way to prove that faith works is to work your faith. Give it a body—put it in action—wait not for a ton but use the ounce that God has given you. Before a man can be ruler over many cities he has to prove himself faithful over one. But if he locks up the gate of the city that God has given him and the inhabitants of the soul sleep in apathy and in lethargy, he will never become a George Müller and will never know the power of active, appropriating faith.

On the foundation of God’s Word I stand when I declare unto you that all things—not some things—but all things are possible to the man who believes.

When we pray we should ask in faith, and in that faith there should not be an element of doubt. All things are possible to the man who believes—because when he believes, he believes God. Jesus is the author and finisher of our faith.

Pick up your own copy of The Meaning of Faith now! 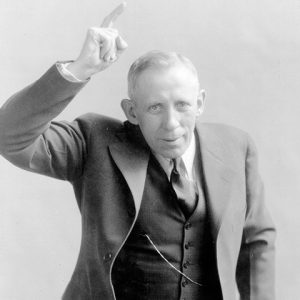 The Meaning of Faith
Print – Amazon

Mussolini: Is He the Anti-Christ?
Print – Amazon – iBooks