The Enduement on Power (Part 4), by Charles Finney 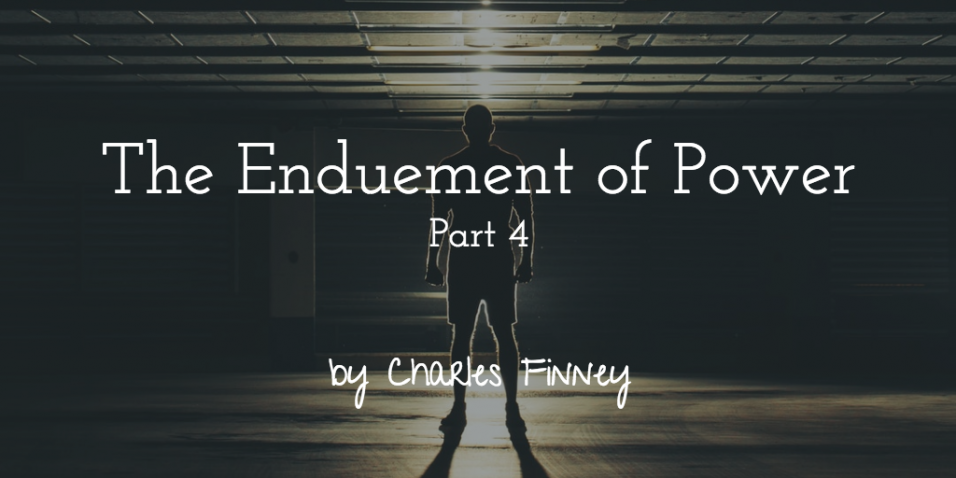 The Enduement of Power (Part 4), by Charles Finney

The Conditions of Receiving This Power

“And, behold, I send the promise of my Father upon you: but tarry ye in the city of Jerusalem, until ye be endued with power from on high.” —Luke 24:49

In this chapter I propose to consider the conditions upon which this enduement of power can be obtained. Let us borrow a light from the Scriptures. I will not cumber this chapter with quotations from the Bible, but simply state a few facts that will readily be recognized by all readers of the Scriptures. If the reader will read in the last chapter of Matthew and of Luke the commission which Christ gave to His disciples, and in connection read the first and second chapters of the Acts of the Apostles, he will be prepared to appreciate what I have to say.

1. The disciples had already been converted to Christ, and their faith had been confirmed by His resurrection. But here let me say that conversion to Christ is not to be confounded with a consecration to the great work of the world’s conversion. In conversion the soul has to do directly and personally with Christ. It yields up its prejudices, its antagonisms, its self-righteousness, its unbelief, its selfishness; accepts Him, trusts Him, and supremely loves Him. All this the disciples had, more or less, distinctly done. But as yet they had received no definite commission, and no particular enduement of power to fulfill a commission.

2. But when Christ had dispelled their great bewilderment resulting from His crucifixion and confirmed their faith by repeated interviews with them, He gave them their great commission to win all nations to Himself. But He admonished them to tarry at Jerusalem till they were endued with power from on high, which He said they should receive not many days hence. Now observe what they did. They assembled—the men and women—for prayer. They accepted the commission, and, doubtless, came to a mutual understanding of the nature of the commission, and the necessity of the spiritual enduement which Christ had promised. As they continued day after day in prayer and conference, they, no doubt, came to appreciate more and more the difficulties that would beset them, and to feel more and more their inadequacy to the task. A consideration of the circumstances and results leads to the conclusion that they one and all consecrated themselves, with all they had, to the conversion of the world as their life-work. They must have renounced utterly the idea of living to themselves in any form, and devoted themselves with all their powers to the work set before them. This consecration of themselves to the work, this self-renunciation, this dying to all that the world cold offer them, must, in the order of nature, have preceded their intelligent seeking of the promised enduement of power from on high. They then continued, with one accord, in prayer for the promised baptism of the Spirit, which baptism included all that was essential to their success. Observe, they had a work set before them. They had a promise of power to perform it. They were admonished to wait until the promise was fulfilled. How did they wait? Not in listlessness and inactivity; not in making preparations, by study and otherwise, to get along without it; not by going about their business, and offering an occasional prayer that the promise might be fulfilled; but they continued in prayer, and persisted in their suit till the answer came. They understood that it was to be a baptism by the Holy Ghost. They understood that it was to be received from Christ. They prayed in faith. They held on, with the firmest expectations, until the enduement came. Now, let these facts instruct us as to the conditions of receiving this enduement of power.

1. We, as Christians, have the same commission to fulfill. As truly as they did we need an enduement of power from on high. Of course, the same injunction, to wait upon God till we receive it, is given to us.

We have the same promise that they had. Now, let us take substantially and in spirit the same course that they did. They were Christians, and had a measure of the Spirit to lead them in prayer and in consecration. So have we. Every Christian possesses a measure of the Spirit of Christ; enough of the Holy Spirit to lead us to true consecration, and inspire us with the faith that is essential to our prevalence in prayer. Let us, then, not grieve or resist Him; but accept the commission, fully consecrate ourselves, with all we have, to the saving of souls as our great and our only life-work. Let us get on to the altar with ALL we have and are, and lie there and persist in prayer till we receive the enduement. Now, observe, conversion to Christ is not to be confounded with the acceptance of this commission to convert the world. The first is a personal transaction between the soul and Christ, relating to its own salvation. The second is the soul’s acceptance of the service in which Christ purposes to employ it. Christ does not require us to make brick without straw. To whom He gives the commission He also gives the admonition and the promise. If the commission is heartily accepted, if the promise is believed, if the admonition to wait upon the Lord till our strength is renewed be complied with, we shall receive the enduement.

It is of the last importance that all Christians should understand that this commission to convert the world is given to them by Christ individually.

Every one has the great responsibility devolved upon him or her to win as many souls as possible to Christ This is the great privilege and the great duty of all the disciples of Christ. There are a great many departments in this work. But in every department we may and ought to possess this power; that whether we preach, or pray, or write, or print, or trade, or travel, take care of children, or administer the government of the state, or whatever we do, our whole life and influence should be permeated with this power. Christ says: “If any man believe in Me, out of his belly shall flow rivers of living water” that is, a Christian influence, having in it the element of power to impress the truth of Christ upon the hearts of men, shall proceed from him. The great want of the Church at present is, first, the realizing conviction that this commission to convert the world is given to each of Christ’s disciples as His life-work. I fear I must say that the great mass of professing Christians seem never to have been impressed with this truth. The work of saving souls they leave to ministers. The second great want is a realizing conviction of the necessity of this enduement of power upon every individual soul. Many professors of religion suppose it belongs especially and only to such as are called to preach the gospel as a life-work. They fail to realize that all are called to preach the gospel; that the whole life of every Christian is to be a proclamation of the glad tidings. A third want is an earnest faith in the promise of this enduement. A vast many professors of religion, and even ministers, seem to doubt whether this promise is to the whole Church and to every Christian. Consequently they have no faith to lay hold of it. If it does not belong to all, they don’t know to whom it does belong. Of course they cannot lay hold of the promise by faith. A fourth want is that persistence in waiting upon God for it that is enjoined in the Scriptures. They faint before they have prevailed, and, hence, the enduement is not received. Multitudes seem to satisfy themselves with a hope of eternal life for themselves. They never get ready to dismiss the question of their own salvation; leaving that, as settled.; with Christ. They don’t get ready to accept the great commission to work for the salvation of others, because their faith is so weak that they do not steadily leave the question of their own salvation in the hands of Christ; and even some ministers of the gospel, I find, are in the same condition, and halting in the same way, unable to give themselves wholly to the work of saving others, because in a measure unsettled about their own salvation. It is amazing to witness the extent to which the Church has practically lost sight of the necessity of this enduement of power! Much is said of our dependence upon the Holy Spirit by almost everybody; but how little is this dependence realized. Christians, and even ministers, go to work without it. I mourn to be obliged to say that the ranks of the ministry seem to be filling up with those who do not possess it. May the Lord have mercy upon us! Will this last remark be thought uncharitable? If so, let the report of the Home Missionary Society, for example, ‘be heard upon this subject. Surely, something is wrong.

An average of five souls won to Christ by each missionary of that society in a year’s toil certainly indicates a most alarming weakness in the ministry. Have all, or even a majority of these ministers, been endued with the power which Christ promised? If not, why not? But, if they have, is this all that Christ intended by His promise? In a former chapter I have said that the reception of this enduement of power is instantaneous. I do not mean to assert that in every instance the recipient was aware of the precise time at which the power commenced to work mightily within him. It may have commenced like the dew, and increased to a shower. I have alluded to the report of the Home Missionary Society. Not that I suppose that the brethren employed by that society are exceptionally weak in faith and power as laborers for God. On the contrary, from my acquaintance with some of them, I regard them as among our most devoted and self-denying laborers in the cause of God. This fact illustrates the alarming weakness that pervades every branch of the Church, both clergy and laity. Are we not weak? Are we not criminally weak? It has been suggested that by writing thus I should offend the ministry and the Church. I cannot believe that the statement of so palpable a fact will be regarded as an offense. The fact is, there is something sadly defective in the education of the ministry and of the Church. The ministry is weak because the Church is weak. And then, again, the Church is kept weak by the weakness of the ministry. Oh! for a conviction of the necessity of this enduement of power and faith in the promise of Christ.