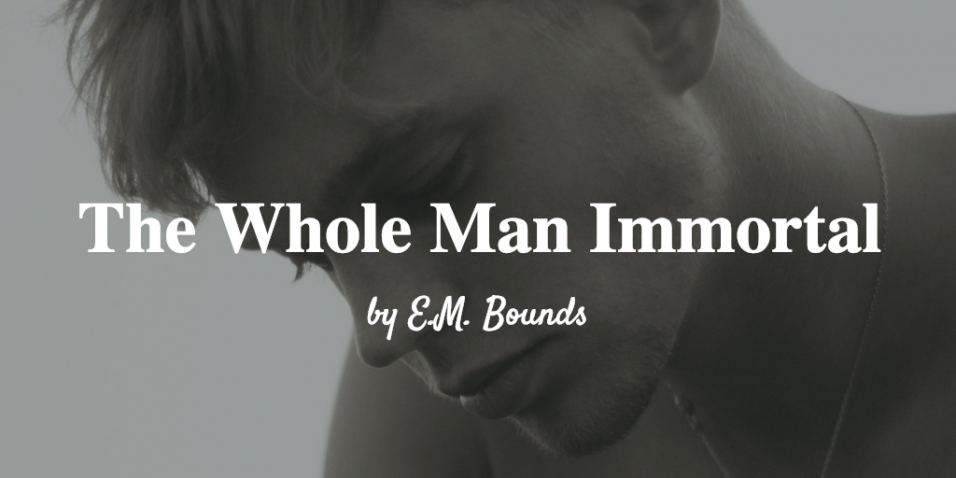 The following is from Bounds’ classic work “The Ineffable Glory” which is available individually, and is also contained in our eBook “The Collected Works of E.M. Bounds,” available at the following retailers:
Kindle — iBooks — B&N Nook — Kobo

Present and future are alike bound up in our belief of our Lord’s resurrection and ascension; and dreary indeed must this present be, and gloomy and clouded that future, if our belief in our risen and ascended Lord be uncertain, partial, precarious.  —Bishop Ellicott

To the front, as the solid foundation for the resurrection of the body, is the resurrection of Jesus Christ. His resurrection opens the doors of the grave and lets in light and creates hope. “Go tell his disciples that he is risen.” This angel announcement carries assurance and brightness to all earth’s realms of doubt and death.

“The resurrection of Christ is the cause of our resurrection,” as Pearson on the Creed says, “by a double causality as an efficient and an exemplary cause—as an efficient cause in regard that our Savior by and upon his resurrection hath obtained power and right to raise all the dead, “For as in Adam all die, even so in Christ shall all be made alive;” as an exemplary cause in regard that all the saints of God shall rise after the similitude and in conformity to the resurrection of Christ, “For if we have been planted together in the likeness of his death, we shall be also in the likeness of his resurrection.” He shall change our vile bodies that they may be fashioned like unto his glorious body. As we have borne the image of the earthy, we may bear the image of the heavenly. This is the great hope of the Christian that Christ rising from the dead hath obtained the power and is become the pattern of his resurrection. Thy dead shall live; my dead bodies shall arise. Awake and sing, ye that dwell in the dust, for thy dew is as the dew of herbs, and the earth shall cast forth her dead.

The Scriptures link these two facts together, the resurrection of Jesus Christ from the dead and the resurrection of man’s body from the grave. The dire results of his failing to rise, the gloom and wreck of an unrisen Christ is not too strongly put by an inspired writer: “Now if Christ be preached that he rose from the dead, how say some among you that there is no resurrection of the dead? But if there be no resurrection of the dead, then is Christ not risen; and if Christ be not risen, then is our preaching vain, and your faith is also vain. Yea, and we are found false witnesses of God; because we have testified of God that he raised up Christ: whom he raised not up, if so he that the dead rise not. For if the dead rise not, then is not Christ raised; and if Christ he not raised, your faith is vain; ye are yet in your sins. Then they also which are fallen asleep in Christ are perished. If in this life only we have hope in Christ, we are of all men most miserable. But now is Christ risen from the dead, and become the first fruits of them that slept. For since by man came death, by man came also the resurrection of the dead. For as in Adam all die, even so in Christ shall all be made alive. But every man in his own order: Christ the first fruits; afterwards they that are Christ’s at his coming.”

Paul puts it strongly again: “For if we believe that Jesus died and rose again, even so them also that sleep in Jesus will God bring with him. But if the Spirit of him that raised up Jesus from the dead dwell in you, he that raised up Christ from the dead shall also quicken your mortal bodies by his spirit that dwelleth in you. And God hath hath raised up the Lord, and will also raise up us by his own power. Knowing that he which raised up the Lord Jesus shall raise up us also by Jesus, and shall present us with you.”

The Scriptures bear ample and continuous evidence that the faith of the resurrection of the body lies in the faith that Jesus Christ died and rose again. If his flesh rotted in the sepulcher of Joseph, then our hope of coming out of the grave rots also; if his body went to the dust of Palestine, then our faith, fancied faith and vaunted hope, of the resurrection is as pulseless and dead as dust.

All the simple and invincible proofs of the resurrection of Jesus Christ are confirmations deep, true, eternal as Holy Writ that our bodies, at the call of Jesus Christ, shall roll off the reproach and break the iron chains of death.

The resurrection of Jesus is the great affirming and cementing fact. By it he was declared to be the Son of God with power; it is the fitting and necessary complement to his advent and crucifixion; it binds into a complete whole all the facts of his wondrous life and puts the seal of truth on them; the keystone of the sacred arch, the crown of the system, the miracle of all miracles. It saves his crucifixion from scorn. It puts divinity and glory on the cross. The resurrection of Jesus Christ was necessary to establish the truth of his mission and put the stamp of all-conquering power on his gospel. His death met the law, conciliated divine justice; his resurrection sent the proclamation of liberty through all the realms of the dead and led the conqueror Death in chains.

The most casual reader of the New Testament can scarcely fail to see the commanding position the resurrection of Christ holds in Christianity. It is the creator of its new and brighter hopes, of its richer and stronger faith, of its deeper and more exalted experience. It is the salient point of New Testament preaching. “Jesus and the resurrection” summarized the subject of their sermonizing. Without this to them there was nothing but gloom and despair. If Christ, says the apostle, be not risen, then is our preaching vain, our faith vain, we are perjured as false witnesses for God, we are yet in our sins, our dead in Christ have perished hopelessly, and we are of all men most miserable. All these dire results are predicated of us if Christ be not risen. But the apostle arrests all these appalling consequences, and throws a flood of light and hope and life over the scene by this restatement and reassurance: “But now is Christ risen from the dead, and become the first fruits of them that slept.” The resurrection of Christ reanimates our hopes of heaven and fixes them as sure as its foundations of adamant, and as precious and beautiful as its jeweled walls.

The resurrection of Jesus Christ is the birth of a new, glorious, immortal life on the realms of the midnight of death, the rising of the new sun on the terrors of darkness and night. It is the opening of a bright and noble highway to heaven where everything had been closed and sealed and every hope withered. Peter’s rapturous acclaim is not the transport of impulse, but it is born of the most glorious and divine fact—a fact as solid and enduring as the granite of heaven, as enrapturing as the bliss and beauty of heaven.

The resurrection of Christ not only lifts darkness and dread from the tomb, but also spans the abyss which separates us from our loved dead, and puts into us the strength and hope of a glorious reunion in the very face of a separation the most painful, disastrous, and despairing.

The resurrection of Jesus both assures and patterns our resurrection; the two are conjoined. The non-resurrection of the body relegates Jesus back to his grave, and seals it as forever dead. Peter’s triumphant shout plants the flower of immortality and life on every tombstone where faith had wrought its wondrous work.

“Blessed be the God and Father of our Lord Jesus Christ, who according to his great mercy begat us again unto a living hope by the resurrection of Jesus Christ from the dead, unto an inheritance incorruptible, and undefiled, and that fadeth not away, reserved in heaven for you, who by the power of God are guarded through faith unto a salvation ready to be revealed in the last time. Wherein ye greatly rejoice.”

The resurrection of Christ is the assurance and type of ours—his body which died, the same and not another, was raised. These bodies we now bear, the same ones we shall put in the grave, will be raised and fashioned after his glorious body. His resurrection takes the tyranny and sting from death, destroys its fears and vanquishes its dominion, brings the angels down beside our grave, plants hope and immortality on the ruins of that grave. His resurrection conquers for us a way through the dark domain of death; by it corruption puts on incorruption, mortality puts on immortality. Death is swallowed up, the victor’s song is on our dying lips, and death becomes our coronation day.