Much Time Should Be Given to Prayer, by E.M. Bounds

Jawbone Digital > Blog > Devotional > Much Time Should Be Given to Prayer, by E.M. Bounds 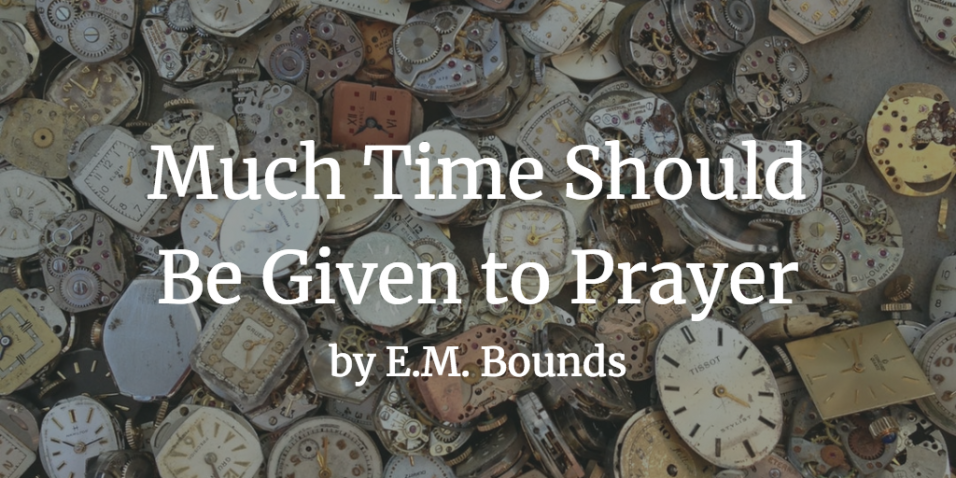 The following is from Bounds’ classic work “Power Through Prayer” which is available at the following retailers:
Pocket edition — iBooks

This book is also contained in our eBooks “The Collected Works of E.M. Bounds,” which is available at the following retailers:
Kindle — iBooks — B&N Nook — Kobo

Much Time Should Be Given to Prayer, by E.M. Bounds

“The great masters and teachers in Christian doctrine have always found in prayer their highest source of illumination. Not to go beyond the limits of the English Church, it is recorded of Bishop Andrews that he spent five hours daily on his knees. The greatest practical resolves that have enriched and beautified human life in Christian times have been arrived at in prayer.” —Canon Liddon

While many private prayers, in the nature of things, must be short; while public prayers, as a rule, ought to be short and condensed; while there is ample room for and value put on ejaculatory prayer—yet in our private communions with God time is a feature essential to its value. Much time spent with God is the secret of all successful praying. Prayer which is felt as a mighty force is the mediate or immediate product of much time spent with God. Our short prayers owe their point and efficiency to the long ones that have preceded them. The short prevailing prayer cannot be prayed by one who has not prevailed with God in a mightier struggle of long continuance. Jacob’s victory of faith could not have been gained without that all-night wrestling. God’s acquaintance is not made by pop calls. God does not bestow his gifts on the casual or hasty comers and goers. Much with God alone is the secret of knowing him and of influence with him. He yields to the persistency of a faith that knows him. He bestows his richest gifts upon those who declare their desire for and appreciation of those gifts by the constancy as well as earnestness of their importunity. Christ, who in this as well as other things is our Example, spent many whole nights in prayer. His custom was to pray much. He had his habitual place to pray. Many long seasons of praying make up his history and character. Paul prayed day and night. It took time from very important interests for Daniel to pray three times a day. David’s morning, noon, and night praying were doubtless on many occasions very protracted. While we have no specific account of the time these Bible saints spent in prayer, yet the indications are that they consumed much time in prayer, and on some occasions long seasons of praying was their custom.

We would not have any think that the value of their prayers is to be measured by the clock, but our purpose is to impress on our minds the necessity of being much alone with God; and that if this feature has not been produced by our faith, then our faith is of a feeble and surface type.

The men who have most fully illustrated Christ in their character, and have most powerfully affected the world for him, have been men who spent so much time with God as to make it a notable feature of their lives. Charles Simeon devoted the hours from four till eight in the morning to God. Mr. Wesley spent two hours daily in prayer. He began at four in the morning. Of him, one who knew him well wrote: “He thought prayer to be more his business than anything else, and I have seen him come out of his closet with a serenity of face next to shining.” John Fletcher stained the walls of his room by the breath of his prayers. Sometimes he would pray all night; always, frequently, and with great earnestness. His whole life was a life of prayer. “I would not rise from my seat,” he said, “without lifting my heart to God.” His greeting to a friend was always: “Do I meet you praying?” Luther said: “If I fail to spend two hours in prayer each morning, the devil gets the victory through the day. I have so much business I cannot get on without spending three hours daily in prayer.” He had a motto: “He that has prayed well has studied well.”

Archbishop Leighton was so much alone with God that he seemed to be in a perpetual meditation. “Prayer and praise were his business and his pleasure,” says his biographer. Bishop Ken was so much with God that his soul was said to be God-enamored. He was with God before the clock struck three every morning. Bishop Asbury said: “I propose to rise at four o’clock as often as I can and spend two hours in prayer and meditation.” Samuel Rutherford, the fragrance of whose piety is still rich, rose at three in the morning to meet God in prayer. Joseph Alleine arose at four o’clock for his business of praying till eight. If he heard other tradesmen plying their business before he was up, he would exclaim: “O how this shames me! Doth not my Master deserve more than theirs?” He who has learned this trade well draws at will, on sight, and with acceptance of heaven’s unfailing bank.

One of the holiest and among the most gifted of Scotch preachers says: “I ought to spend the best hours in communion with God. It is my noblest and most fruitful employment, and is not to be thrust into a corner. The morning hours, from six to eight, are the most uninterrupted and should be thus employed. After tea is my best hour, and that should be solemnly dedicated to God. I ought not to give up the good old habit of prayer before going to bed; but guard must be kept against sleep. When I awake in the night, I ought to rise and pray. A little time after breakfast might be given to intercession.” This was the praying plan of Robert McCheyne. The memorable Methodist band in their praying shame us. “From four to five in the morning, private prayer; from five to six in the evening, private prayer.”

John Welch, the holy and wonderful Scotch preacher, thought the day ill spent if he did not spend eight or ten hours in prayer. He kept a plaid that he might wrap himself when he arose to pray at night. His wife would complain when she found him lying on the ground weeping. He would reply: “O woman, I have the souls of three thousand to answer for, and I know not how it is with many of them!”