Preachers Need the Prayers of the People, by E.M. Bounds 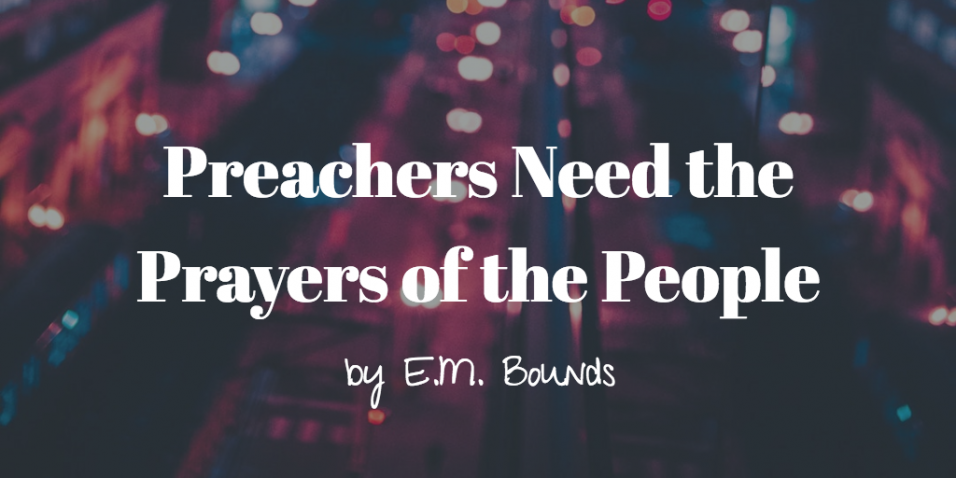 The following is from Bounds’ classic work “Power Through Prayer” which is available at the following retailers:
Pocket – iTunes

This book is also contained in our eBooks “The Collected Works of E.M. Bounds,” which is available at the following retailers:
Kindle — iBooks — B&N Nook — Kobo

Preachers Need the Prayers of the People, by E.M. Bounds

“If some Christians that have been complaining of their ministers had said and acted less before men and had applied themselves with all their might to cry to God for their ministers—had, as it were, risen and stormed heaven with their humble, fervent and incessant prayers for them—they would have been much more in the way of success.” —Jonathan Edwards

Somehow the practice of praying in particular for the preacher has fallen into disuse or become discounted. Occasionally have we heard the practice arraigned as a disparagement of the ministry, being a public declaration by those who do it of the inefficiency of the ministry. It offends the pride of learning and self-sufficiency, perhaps, and these ought to be offended and rebuked in a ministry that is so derelict as to allow them to exist.

Prayer, to the preacher, is not simply the duty of his profession, a privilege, but it is a necessity. Air is not more necessary to the lungs than prayer is to the preacher. It is absolutely necessary for the preacher to pray. It is an absolute necessity that the preacher be prayed for. These two propositions are wedded into a union which ought never to know any divorce: the preacher must pray; the preacher must be prayed for. It will take all the praying he can do, and all the praying he can get done, to meet the fearful responsibilities and gain the largest, truest success in his great work. The true preacher, next to the cultivation of the spirit and fact of prayer in himself, in their intensest form, covets with a great covetousness the prayers of God’s people.

The holier a man is, the more does he estimate prayer; the clearer does he see that God gives himself to the praying ones, and that the measure of God’s revelation to the soul is the measure of the soul’s longing, importunate prayer for God. Salvation never finds its way to a prayerless heart. The Holy Spirit never abides in a prayerless spirit. Preaching never edifies a prayerless soul. Christ knows nothing of prayerless Christians. The gospel cannot be projected by a prayerless preacher. Gifts, talents, education, eloquence, God’s call, cannot abate the demand of prayer, but only intensify the necessity for the preacher to pray and to be prayed for. The more the preacher’s eyes are opened to the nature, responsibility, and difficulties in his work, the more will he see, and if he be a true preacher the more will he feel, the necessity of prayer; not only the increasing demand to pray himself, but to call on others to help him by their prayers.

Paul is an illustration of this. If any man could project the gospel by dint of personal force, by brain power, by culture, by personal grace, by God’s apostolic commission, God’s extraordinary call, that man was Paul. That the preacher must be a man given to prayer, Paul is an eminent example. That the true apostolic preacher must have the prayers of other good people to give to his ministry its full quota of success, Paul is a preeminent example. He asks, he covets, he pleads in an impassioned way for the help of all God’s saints. He knew that in the spiritual realm, as elsewhere, in union there is strength; that the concentration and aggregation of faith, desire, and prayer increased the volume of spiritual force until it became overwhelming and irresistible in its power. Units of prayer combined, like drops of water, make an ocean which defies resistance. So Paul, with his clear and full apprehension of spiritual dynamics, determined to make his ministry as impressive, as eternal, as irresistible as the ocean, by gathering all the scattered units of prayer and precipitating them on his ministry. May not the solution of Paul’s preeminence in labors and results, and impress on the Church and the world, be found in this fact that he was able to center on himself and his ministry more of prayer than others? To his brethren at Rome he wrote: “Now I beseech you, brethren, for the Lord Jesus Christ’s sake, and for the love of the Spirit, that ye strive together with me in prayers to God for me.” To the Ephesians he says: “Praying always with all prayer and supplication in the Spirit, and watching thereunto with all perseverance and supplication for all saints; and for me, that utterance may be given unto me, that I may open my mouth boldly, to make known the mystery of the gospel.” To the Colossians he emphasizes: “Withal praying also for us, that God would open unto us a door of utterance, to speak the mystery of Christ, for which I am also in bonds: that I may make it manifest as I ought to speak.” To the Thessalonians he says sharply, strongly: “Brethren, pray for us.” Paul calls on the Corinthian Church to help him: “Ye also helping together by prayer for us.” This was to be part of their work. They were to lay to the helping hand of prayer. He in an additional and closing charge to the Thessalonian Church about the importance and necessity of their prayers says: “Finally, brethren, pray for us, that the word of the Lord may have free course, and be glorified, even as it is with you: and that we may be delivered from unreasonable and wicked men.” He impresses the Philippians that all his trials and opposition can be made subservient to the spread of the gospel by the efficiency of their prayers for him. Philemon was to prepare a lodging for him, for through Philemon’s prayer Paul was to be his guest.

Paul’s attitude on this question illustrates his humility and his deep insight into the spiritual forces which project the gospel. More than this, it teaches a lesson for all times, that if Paul was so dependent on the prayers of God’s saints to give his ministry success, how much greater the necessity that the prayers of God’s saints be centered on the ministry of today!

Paul did not feel that this urgent plea for prayer was to lower his dignity, lessen his influence, or depreciate his piety. What if it did? Let dignity go, let influence be destroyed, let his reputation be marred—he must have their prayers. Called, commissioned, chief of the Apostles as he was, all his equipment was imperfect without the prayers of his people. He wrote letters everywhere, urging them to pray for him. Do you pray for your preacher? Do you pray for him in secret? Public prayers are of little worth unless they are founded on or followed up by private praying. The praying ones are to the preacher as Aaron and Hur were to Moses. They hold up his hands and decide the issue that is so fiercely raging around them.

The plea and purpose of the apostles were to put the Church to praying. They did not ignore the grace of cheerful giving. They were not ignorant of the place which religious activity and work occupied an the spiritual life; but not one nor all of these, in apostolic estimate or urgency, could at all compare in necessity and importance with prayer. The most sacred and urgent pleas were used, the most fervid exhortations, the most comprehensive and arousing words were uttered to enforce the all-important obligation and necessity of prayer.

“Put the saints everywhere to praying” is the burden of the apostolic effort and the keynote of apostolic success. Jesus Christ had striven to do this in the days of his personal ministry. As he was moved by infinite compassion at the ripened fields of earth perishing for lack of laborers and pausing in his own praying—he tries to awaken the stupid sensibilities of his disciples to the duty of prayer as he charges them, “Pray ye the Lord of the harvest that he will send forth laborers into his harvest.” “And he spake a parable unto them to this end, that men ought always to pray and not to faint.”