The Doctrine of Christian Perfection, by Samuel Chadwick 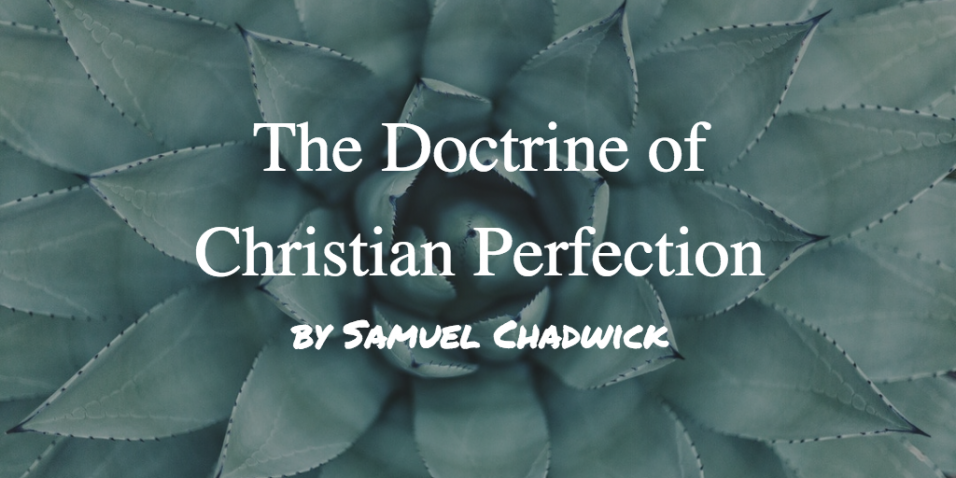 The Doctrine of Christian Perfection, by Samuel Chadwick

It was the settled conviction of John Wesley that the Lord had raised up the Methodist people “to spread Scriptural Holiness throughout the land.” The doctrine was in a peculiar sense committed to them. Perhaps it would not be quite true to say it was discovered by them, but they received it, preached it, and formulated it in their teaching as never before in the history of the Christian Church. The witness to the experience has come down through the ages, but John Wesley became its apostle. For thirty years he preached it, expounded it, and defended it. When he died, he deposited it with the Methodist people as their special charge and responsibility. A collection of his teachings, warnings, and appeals on this subject would come with a shock to many of the people called Methodists. If it were not for Wesley’s Hymnbook, there would be many who had not so much as heard of the doctrine. The late Dr. Dale used to say that the last word on the subject was still with Wesley, but he was equally sure the last word had not yet been spoken. He regretted that the Methodist people had done nothing to develop the doctrine. Keswick has tried to correct the Methodist emphasis by stating the doctrine from the Calvinistic angle, and some American theologians have attempted its statement in modern terms; but the standard teaching is still that of Wesley.

The Need For Restatement

Wesley’s statement of the doctrine was obviously incomplete, but had it been complete it would have needed a new birth for the new age. Truth needs to be reborn. Words change their content, and lose their value. Some become archaic, and others obsolete. Truth must be progressive. New problems call for new developments. Faith must speak in new tongues, if it would cast out devils and heal the diseases and wounds of the world. There were some things upon which even Wesley hesitated to pronounce. I love the frankness with which he dismissed what he could not explain: “I confess that I cannot split this hair.” His teaching was experimental, and he refused to be entangled in philosophical speculations. He never shirked a practical problem, but he could only deal with those of his own age. Principles are eternal and universal, but rules are determined by times and circumstances. His anxiety to avoid all suspicion of preaching “a sinless perfection” led him to reckon in the category of sins some infirmities and limitations which are entirely destitute of moral character It is never satisfactory to have a problem dismissed with a gesture, as when in 1776 he answers the question, “Is it sinless?” with the remark, “It is not worth while to contend for a term: it is salvation from sin.” The contention is for something more than a term. It is a demand for clearness of thought, intelligence of faith, and instruction in the implications of experience.

We have to plead guilty to the charge that we have not been faithful stewards of this great “depositum” of grace. There is with one consent a culpable silence on the subject. For sixteen years I heard candidates for ordination asked if they ever preached specifically and definitely on the subject of Holiness as an experience, and the answer was always the same. All their preaching was on Holiness, but they had not specifically expounded or urged the experience.

The causes for neglect are numerous and various. No doubt some avoid it because of its demands. They are content with the measure of light they have, because they are satisfied with the level at which they live. Others are in bondage to prejudice. The logic of unbelief is the same in saints as in sinners. The ungodly reject the Christian religion because of its hypocrites, and the saints reject the doctrine because of its caricatures. Saintliness has stiffened into types, and they dislike the mold. The profession of the experience has exhibited a severity, complacency, and censoriousness which are peculiarly repellent. Perfection has been too often associated with the phylacteries of the Pharisee to make it commendable. Everyone admits that no cause should be judged by its counterfeit, but in religion the counterfeit keeps many from seeking the true.

I Have Seen an End of All Perfection

A more serious factor has been that for two generations the thought of the age has been hostile. The idea of evolution has been dominant. There has been no place for the supernatural or the catastrophic. It has been assumed that all life must advance in orderly sequence. Salvation must be by culture. There was no need for the Second Birth, and the Second Blessing was an outrage and an offense. The man was in the child, and in the natural man there was latent all the qualities of spiritual life. Clever people asked ignorant questions. If a Second Blessing, why not a thirty-second? If Perfect, how can progress be possible? If saved from sin, why pray the Lord’s Prayer? If saved to the uttermost, what is there beyond? If Love is made perfect, what comes of discipline, ethical values, and the militant character of discipleship?

That tyranny is past. Naturalistic evolution as a universal law of life is discredited and abandoned. The fact of conversion is psychologically sound. The experience of a Second Crisis is no longer counted foolish in the wisdom of this world. We ask no patronage from the mentality of the learned, but we welcome an attitude of mind that is sympathetic to spiritual truth.

The witness still suffers from inadequate statement. It is quite likely that it always will. For it must be remembered that the experience is often received by persons unskilled in the art of precise expression. Philip’s testimony was at fault in two points out of five, and there are many disciples less skilled than he. There are witnesses to the fact of experience, but they are not able to define and explain. They have never acquired the habit of mental analysis, nor have they the knowledge required for exactness of definition. Happily, grace is not conditioned by theology. These things are hid from the clever and the vain, but they are revealed unto babes.

The literature upon the subject is singularly disappointing. I have for years urged the young biblical scholars of the ministry to explore and restate the teaching of the Scriptures on the subject of Holiness. I hope some of them are doing it. I am sure it must be done, for while the witness may be sincere, the teaching is confused, unrelated, and incomplete. The Bible is every man’s best guide, but teaching is necessary, otherwise God would not have included teachers among His gifts to the Church. Wesley is often commended for his sagacity in defining the doctrine in terms of Scripture, and for the purposes of controversy it was proof of his wisdom. For instruction in the faith something more is needed than to be told that: “Pure love alone, reigning in the heart, is the whole of Christian Perfection.” So it is. No words could set before the mind a higher ideal, a simpler principle, or a greater incentive; but there is something in the general terms that engenders vagueness of conception and non-ethical emotion. Faith needs to be instructed, and the heart must be able to give reasons for its experience and hope. Christian teachers must translate their theology into the speech of the twentieth century.

The Need For Revival

Revival is more important than re-statement. Testimony to the possession of the blessing is exceedingly rare. To our fathers there was given a witness of the Spirit to a definite gift as distinct as that borne to adoption. God’s ambassadors are witnesses as well as messengers. What has come to our testimony? In how many pulpits is it heard throughout the year? What about the class-meeting? Testimony is impossible without experience assured to the heart. Failure in fellowship has its roots far deeper than the changes in social life. What about the theological training of the ministry? Is the doctrine expounded with clearness, and the experience urged upon those who are to be the future leaders of our Israel? Is there not occasion to ask whether the doctrine is any longer believed and taught among us?

God of eternal truth and grace,
Thy faithful promise seal!
Thy word, Thy oath, to Abraham’s race,
In us, e’en us, fulfill.

Let us, to perfect love restored,
Thy image here retrieve,
And in the presence of our Lord
The life of angels live.

That mighty faith on me bestow
Which cannot ask in vain,
Which holds, and will not let Thee go,
Till I my suit obtain.

Till Thou into my soul inspire
Thy perfect love unknown,
And tell my infinite desire,
“Whate’er Thou wilt, be done.”

But is it possible that I
Should live and sin no more?
Lord, if on Thee I dare rely,
The faith shall bring the power.

On me the faith divine bestow
Which doth the mountain move;
And all my spotless life shall show
The omnipotence of love.

Samuel Chadwick (1860-1932) was a Wesleyan Methodist minister who spent his life in England. His straight-forward style of Biblical preaching helps to explain why his works are still so approachable today. While many preachers in his day make for difficult reading, his works are certainly user friendly, but still quite challenging to any honest student of the Word of God.

This post comes from Chadwick’s book The Call to Christian Perfection, which is available in the following formats: Amazon — iBooks — Kobo

For more from Chadwick, you can visit his author page. 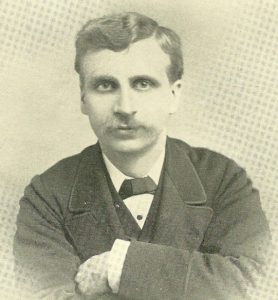