A Partaker of His Divine Nature, by A.A. Allen

Jawbone Digital > Blog > Devotional > A Partaker of His Divine Nature, by A.A. Allen 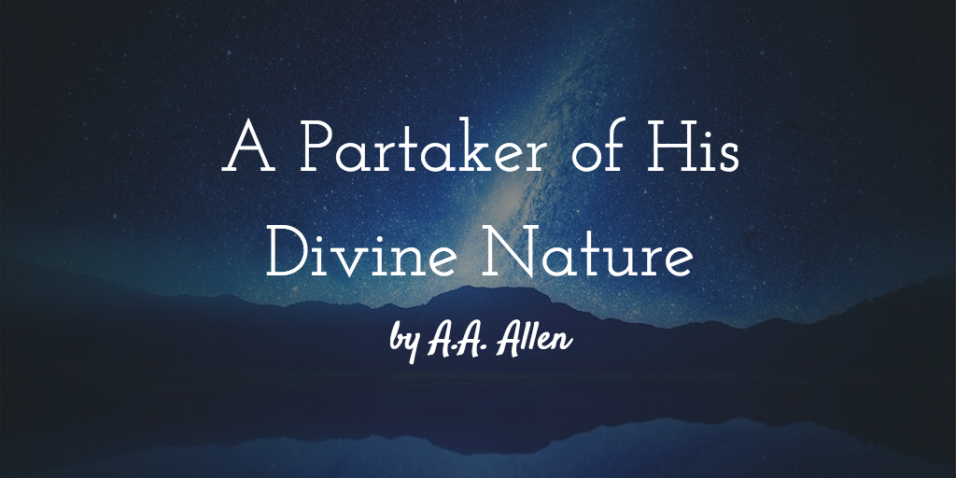 A Partaker of His Divine Nature, by A.A. Allen

“Whereby are given unto us exceeding great and precious promises that by these you might be PARTAKERS OF DIVINE NATURE” (1 Peter 1:4).

God IS power. There is no power for good in this world except that power come from God. Christ himself, when he came into this world in the flesh, declared that he derived his power from God. “I do NOTHING of myself” (John 8:28). “The Son CAN do nothing of himself” (John 5:19). “I am in the father, and the Father in me. The Words that I speak unto you, I speak not of myself: but the FATHER THAT DWELLETH IN ME, HE DOETH THE WORKS” (John 14:10).

After making the emphatic statement of John 14:10, Christ turned to his disciples with a promise—”Verily, verily, I say unto you, He that believeth on me, THE WORKS THAT I DO SHALL HE DO ALSO; and greater works than these shall he do; because I go unto my Father” (John 14:12). But, even as his own work and fruitfulness was conditioned upon his abiding in the Father, our work and fruitfulness was conditioned upon our abiding in him. “Abide in me, and I in you. As the branch cannot bear fruit of itself, except it abide in the vine; no more can ye, except ye abide in me” (John 15:4). “Without ME YE can do nothing” (John 15:5).

Branches can be “cut off,” and they can be grafted.

We, as sinners saved by grace, are compared in God’s word to the branches of a wild olive tree, grafted in. Having been grafted in, we become PARTAKERS of the “root and fatness” of the olive tree (Romans 11:17). If a graft is WELL MADE, so that nothing comes between and interferes with the flow of the sap into the new limb, it very soon comes to LOOK AND ACT like the other parts of the tree.

What a privilege to be made a partaker of the divine nature of God—to LOOK in such a way that those who see us will realize that we have been with Jesus, and to ACT so much like him that the works he did WE DO ALSO!

We can only be partakers of this divine nature by his PROMISES, through faith in his promises. We partake of the divine nature in its effectiveness as we exercise the gifts of the spirit, and in its essence as we show forth the fruits of the spirit. It is in the exercising of the gifts of the Spirit that God shows forth through us his MIRACLE WORKING POWER. “Having then gifts differing—whether prophecy, let us prophecy ACCORDING TO THE PROPORTION OF FAITH” (Romans 12:6). This is the secret of whatever work we are able to do for God. It is done ACCORDING TO THE PROPORTION OF FAITH. We are partakers of the divine nature ACCORDING TO THE PROPORTION OF FAITH. Little faith, the branch is barely alive, the sap barely getting through, a few green leaves making promise that fruit might come. More faith, more of the divine nature, fruitfulness. Much faith, ABUNDANT LIFE, the life giving sap flowing freely to every part of the branch, the weight of the fruit bowing it almost to the ground!

Then when you are a partaker of his divine nature, there will be a wisdom which comes from following the leading of the Spirit. Not the wisdom which is purely natural, nor a wisdom gained merely from observation, but a spirit led wisdom which is incomprehensible to those who do not understand the leading of the spirit. There will be knowledge which comes to your mind out of the knowledge stored in the mind of God. Things which you need to know, but have no other way of knowing, God himself can and will reveal them unto you. There will be POWER, for God IS power! Miracles and Signs will follow. The sick will be healed, the lame will walk, cancers will vanish at your command. The blind will see, the deaf hear. Secrets of people’s hearts will, when necessary, be made manifest. Souls will be stirred from the sleep of spiritual death, and brought as new creatures into the kingdom. Yea, even some whose physical lives are gone, may be brought again from the dead, in the will of God.

God plays no favorites. The same price of power stands to all. And the same power is available to ALL WHO WILL PAY THE PRICE!

To every one who, by faith, will take his “exceeding great and precious promises” for himself, believing with all his heart that GOD MEANT EXACTLY WHAT HE SAID, thus becoming a PARTAKER OF HIS DIVINE NATURE, the door is open to new adventures of faith, beyond your wildest dreams!

Asa Alonso Allen (1911–1970), better known as A.A. Allen was a Pentecostal evangelist who was affiliated with the “Voice of Healing” movement. His ministry was marked with miraculous healing and deliverance from demonic possession. Doubtless, he has proven to be a controversial figure in church history, but his writings are still valuable to us today. The coroner initially reported that he died from acute alcohol poisoning, yet it has since been reported that the coroner falsified the report after receiving a $10,000 bribe.

Whether the accusations and alleged black marks on his character are true or not, it cannot be argued that many Pentecostals and Charismatics today still treasure his works and value the insights he provides. There is no question that many were blessed with healing under his ministry. Allow the book to stand on it’s own merits, and read his sermons carefully, and prayerfully. That’s good advice for any minister, living or dead.

This post is from Allen’s book The Price of God’s Miracle Working Power, and is available in the following formats: Pocket edition – Kindle – iBooks

For more about Allen, you can visit his author page. 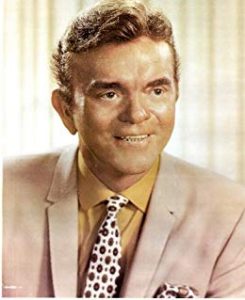