The Enduement on Power (Part 1), by Charles Finney 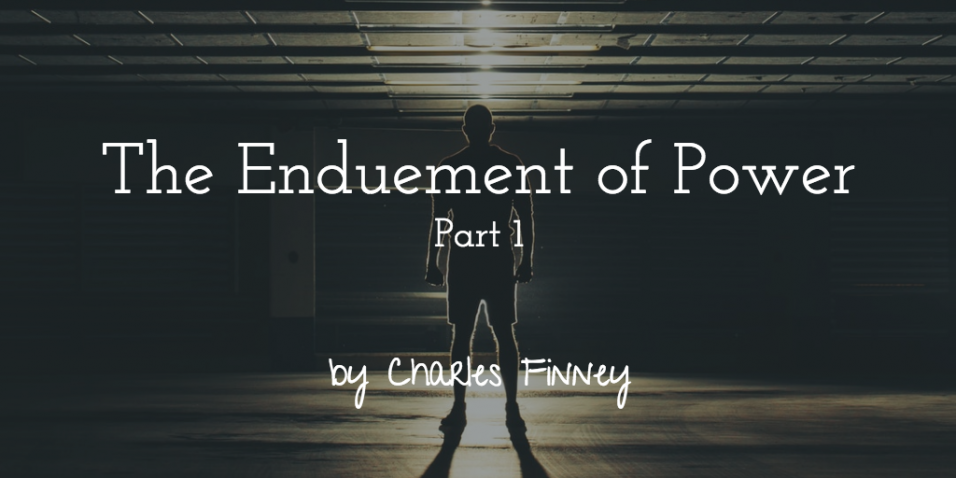 The Enduement of Power (Part 1), by Charles Finney

Reasons Why the Power is Not Received

In my first remarks, I would call attention to the mission of the Church to disciple all nations, as recorded by Matthew and Luke, and state that this commission was given by Christ to the whole Church, and that every member of the Church is under obligation to make it his lifework to convert the world. Upon this I raise two inquiries: 1. What do we need to secure success in this great work? 2. How can we get it?

Answer — 1. We need the enduement of power from on high. Christ had previously informed the disciples that without Him they could do nothing. When He gave them the commission to convert the world, He added: “But tarry ye in Jerusalem till ye be endued with power from on high. Ye shall be baptized with the Holy Ghost not many days hence. Lo! I send upon you the promise of My Father.” This baptism of the Holy Ghost, this blessing promised by the Father, this enduement of power from on high, Christ has expressly informed us, is the indispensable condition of performing the work which He has set before us.

2. How shall we get it? 1. Christ expressly promised it to the whole Church, and to every individual whose duty it is to labor for the conversion of the world. He admonished the first disciples not to undertake the work until they had received this enduement of power from on high. Both the promise and the admonition apply equally to all Christians of every age and nation. No one has at any time any right to expect success unless he first secures the enduement of this power. 3. The example of the first disciples teaches us how to secure this enduement. They first consecrated themselves to the work, and continued in prayer and supplication until the Holy Ghost fell upon them, on the day of Pentecost, and they received the promised enduement of power from on high. This, then, is the way to get it.

“If ye, then, being evil, know how to give good gifts unto your children, how much more shall your heavenly Father give the Holy Spirit to them that ask him.” (Luke 11:13)

1. This text informs us that it is delightfully easy to obtain the Holy Spirit, or this enduement of power, from the Father.

2. That this is made a constant subject of prayer. Everybody prays for this, at all times; and yet, with all this intercession, how few, comparatively, are really endued with the Spirit of power from on high. This want is not met. The want of power is a subject of constant complaint. Christ says, “Everyone that asketh receiveth;” but there certainly is a “great gulf” between the asking and receiving, which is a serious stumbling-block to many. How, then, is this discrepancy to be explained? The answer may appear in some one or all of the following statements:

1. We are not willing, upon the whole, to have what we desire and ask.

2. God has expressly informed us that if we regard iniquity in our hearts He will not hear us. But the petitioner is often self-indulgent. This is iniquity, and God will not hear him.

7. Refuses to confess to all the parties concerned.

9. He is prejudiced and uncandid.

11. He has a revengeful spirit.

12. Has a worldly ambition.

13. He has committed himself on some point, and become dishonest, and rejects further light.

14. He is denominationally selfish.

15. Selfish for his own congregation.

16. He resists the teaching of the Holy Spirit.

17. He grieves the Holy Spirit by dissension.

18. He quenches the Spirit by persistence in justifying wrong.

19. He grieves Him by a want of watch fullness.

20. He resists Him by indulging evil tempers.

21. Also by dishonesties in business.

22. Also by indolence and impatience in waiting upon the Lord.

23. By many forms of selfishness.

24. By negligence in business, in study, in prayer.

25. By undertaking too much business, too much study, and too little prayer.

26. By a want consecration.

27. Last and greatest, by unbelief. He prays for this enduement without expecting to receive it. “He that believeth not God hath made Him a liar.” This, then, is the greatest sin of all. What an insult, what a blasphemy, to accuse God of lying! I conclude by saying that these and other forms of indulged sin explain why so little is received, while so much is asked. Someone may ask, “What is the other side?” The other side presents the certainty that we shall receive the promised enduement of power from on high, and be successful in winning souls, if we ask in faith and fulfill the plainly revealed conditions of prevailing prayer. “But if we first get rid of all the forms of sin which prevent our receiving this enduement, have we not already obtained the blessing? What more do we need?”

Answer: There is a great difference between the peace and the power of the Holy Spirit in the soul. The disciples were Christians before the day of Pentecost, and as such had a measure of the Holy Spirit. They must have had the peace of sins forgiven, and of a justified state; but yet they had not the enduement of power necessary to the accomplishment of the work assigned them. They had the peace which Christ had given them, but not the power which He had promised. This may be true of all Christians; and right here is, I think, the great mistake of the Church and of the ministry. They rest in conversion, and do not seek until they obtain this enduement of power from on high.

Hence, so many professors have no power with either God or man. They prevail with neither? They cling to a hope in Christ, and even enter the ministry, overlooking the admonition to wait until they are endued with power from on high. But let anyone bring all the tithes and offerings into God’s treasury, let him lay all upon the altar, and prove God herewith, and he shall find that God “will open the windows of Heaven, and pour him out a blessing that there shall not be room enough to receive it.”