Jesus Sitting on the Well, by Charles Spurgeon

One of the most daunting projects we ever took on was the four-volume collection of sermon notes from Charles Spurgeon. They contain 264 outlines of sermons that Spurgeon preached at Metropolitan Tabernacle in London, England. If one were both lazy and dishonest, these outlines could be used today to handle the Sunday service for just over five years, but we (obviously) don’t recommend it.

However, they can be of use as study, and also to assist in building your own outlines as you preach or teach. These outlines have been consistently popular among our readers, and it’s no secret as to why. We strongly recommend the complete collection, as the price has been drastically reduced. However, we continue to offer the single volumes.

Now Jacob’s well was there. Jesus therefore, being wearied with his journey, sat thus on the well; and it was about the sixth hour.

MANY things may well remind us of our Lord. Chiefly may we think of him when we see a well or a weary peasant resting at noon.

How truly human was Jesus! To him a long walk brought weariness; his weariness needed rest; to rest he “sat thus on the well.”

How worn was his humanity! He was more weary than the disciples.

He had a greater mental strain than they.

He had a weariness that they knew not of.

His self-denials were even then remarkable.

He would in all points be made like unto his brethren.

He would not exempt himself from fatigue.

He would not work a miracle for his own refreshment.

He would not refuse to bear heat, thirst, exhaustion.

He has thus made himself able to sympathize with—

The traveler who rests by the roadside.

The laborer who is worn-out with toil.

The sufferer who feels pain in bone and flesh.

The poor man who must rest on a cold stone, and look for refreshment to the public fountain.

The weary mind, oppressed by life’s long way, which has no luxurious comfort prepared for it, but finds a measure of repose in the simple arrangements of nature.

Reading this text, let it set a picture before you, and—

I. LET YOUR CONSCIENCE DRAW A SPIRITUAL PICTURE OF YOUR WEARIED SAVIOR.

Perhaps we have specially wearied the Lord, as we read in Amos 2:13, where singular provocations are mentioned.

That is a grave question asked by the prophet Isaiah, “Will ye weary my God also” (Isa. 7:13)?

II. LET YOUR CONSCIENCE DRAW A SPIRITUAL PICTURE OF YOUR WAITING SAVIOR.

How long he has waited for some of you!

At how many points has he been on the outlook for you!

Is he not waiting for you at this very hour? Will you not yield to his patient love?

Alter the position of the character.

[bctt tweet=”Let us live soul-saving, and so let us die. —Charles Spurgeon” username=”JawboneDigital”]

It was the hour of noon, and weary as he was with the long journey, possibly also with the extreme heat, our Lord sat “thus on the well.” The expression in the original is most pathetically picturesque. It implies that the Wayfarer was quite tired out, and in his exhaustion flung his limbs wearily on the seat, anxious, if possible, for complete repose. —Archdeacon Farrar

When hard-working people sit down at midday for their few minutes of rest and refreshment, let them recall their Master’s noonday rest at the well. He was tired, like we are, yet his rest was short, and his work scarcely broken. He was tired with seeking for us. Our stubborn hearts brought him all this way from heaven. He has long sought for our love, and hardly finds it. Think on this verse. With whom did Jesus find his portion in this life? Not with the great and luxurious, but with the common people, sharing their toils. —Practical Reflections on the Gospels By a Clergyman

While we sympathize with the bodily weariness of our Lord, it will be well to remember the soul-weariness which sin must have occasioned him. He hungered to bless men, and they refused the bread of life. He would have gathered them, but they would not be gathered. He must have been specially wearied with the ostentatious hypocrisy of the Pharisees, and the silly legalisms of the Scribes with their tithing of mint and anise. He was often wearied with the dogged unbelief of the Jews, and the provoking want of faith among his own disciples. The sin, the caviling, the slander, the selfishness, the hardness of heart of those about him, must have worn down his holy soul, and made him every day a Man of sorrows. Yet he never left the well, never refused to give the living water to a thirsting soul, never ceased to entreat men to come to him and drink. —C. H. S.

“Jesus, therefore, being wearied”—And in that he himself had suffered, he was the more able and apt to help this poor Samaritan. So the apostle bids us pity those in adversity, as being ourselves in the body, i. e., the body of flesh and frailty, subject to like misery. —Trapp

When wearied, let us still be on the watch to do good. Wearied, and sitting on the well, our Lord is still in the attitude of observation. “I am never too tired to pray,” said a minister, who, after a hard day’s toil, found his host ready to excuse him from conducting family prayer. When God is blessing the Word, true ministers forget their fatigue, and hold on long into the night with inquirers. Alas! when the Holy Spirit has nothing to do with a man’s heart, the man excuses himself from “making overtime;” as I once heard a professor call it, when he quitted the room the instant the service was over. Another, in describing a minister, said, “Oh, he is so cold! He is one who thinks it is wrong to be too religious. He cannot endure zeal.” Be it ours to show a more excellent way. Holy Brainerd, when he could not preach, because he was on his dying bed, called to him a little Indian boy, and tried to teach him his letters. Let us live soul-saving, and so let us die. —C. H. S. 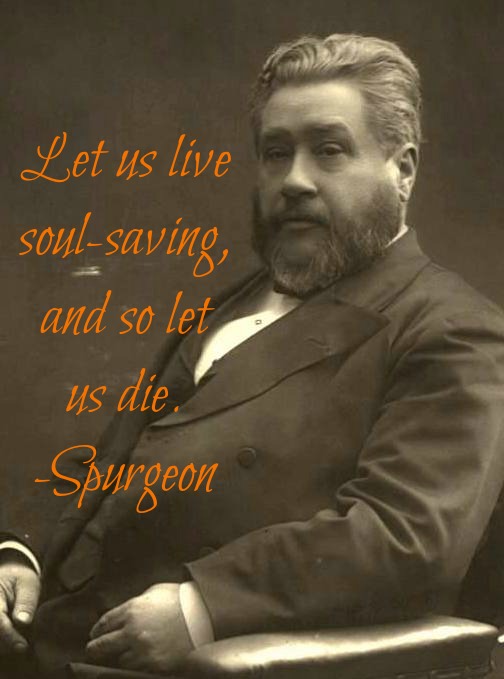